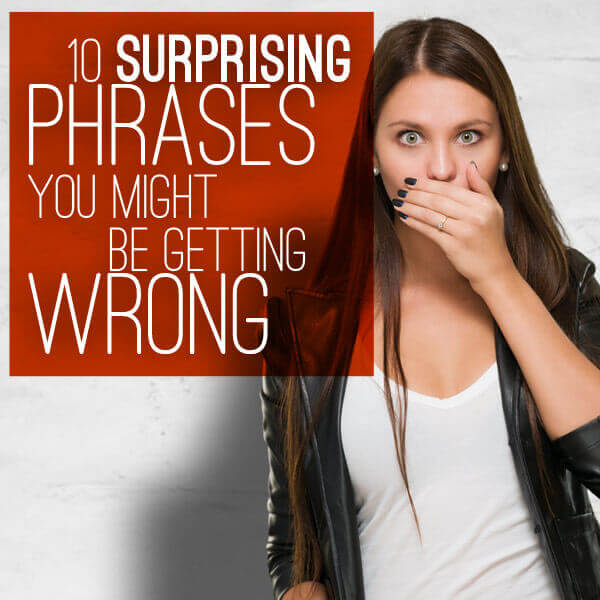 Many of us bloggers may not have started our blogs out of our love for the written word. There are many bloggers who are “ideas” people– those who love sharing information about a favorite topic. Personally, I started blogging in spite of the fact writing wasn't my first love; it was a marriage of necessity. Right now, I can almost hear grammarians and writers screeching to a halt at this confession.

That said, it didn't stop me. Several years later, I've come to see common mistakes made by people translating how they speak to the written word. Writing like you talk is a great way to establish a connection with your readers. I'm not much for grammar rules unless they change the meaning of a sentence.  However, getting a phrase or colloquialism wrong changes the meaning of the phrase, which can be confusing for readers!

Here are 10 common phrases you might be getting wrong, what they mean, and how to get them right:

As bloggers we're given “free rein” on our blogs, since we mostly own our blogs. “Free reign” is commonly used, but “reign” is what creepy King Joffrey does with his royal power. The phrase actually uses the word “rein” which are the leather straps used to control horses. Sometimes riders would loosen the “reins” to allow the horse to chose the safest path on a difficult course, giving the horse “free rein.”

“For all intents and purposes”

Again with the “peaks,” “peeks,” and “piques”! It can get confusing. Often I see “peak my curiosity.” It kind of makes sense, given the meaning of the word. However, it's correct to use the word “pique” which means to provoke or arouse.

It might be tempting to nip your problem in the butt, but you really want to “nip it in the bud” — meaning take care of it before the “bud” grows into something much bigger, like a tree, or whatever buds grow up to become.

What are some of the mistaken phrases you've seen around? Do share!