Guilty Pleasure or Just Guilty? An Interview With Get Off My Internets

IFB » Influencers, Bloggers, Must Haves, Inspiration » Guilty Pleasure or Just Guilty? An Interview With Get Off My Internets 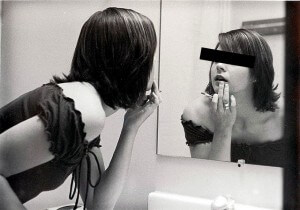 Since its inception in 2009, Get Off My Internets has been one of the most controversial sites among fashion and lifestyle bloggers. Its editors critique and examine the posts and personalities of bloggers, and that's putting it lightly. From tongue-in-cheek call outs to cringe-worthy speculation, GOMI has become to fashion bloggers what National Enquirer is to celebrities (sans alien auctions).  We had a chance to talk to Lancelle, one of GOMI's contributors to get the scoop on why they love to target fashion bloggers, where they think we're headed and how to avoid getting covered by them.

What do you think about the fashion and lifestyle blogging landscape at this time? Have you noticed any major changes or trends since the beginning of GOMI?

Fashion and lifestyle blogging is more materialistic than I've ever seen it. It's been said on GOMI again and again that there are legitimate shopping addictions out there being fed and coddled by blog readers. Every time a post about a purchase gets comments, that blogger thinks to themselves, “This purchase was worthwhile because it got me attention, comments, etc., etc.” Meanwhile, there might be a significant amount of debt being accrued in the background. Even if there isn't, I wonder often if bloggers buy something because they actually want the object or because they feel a competitive drive to have it first and show it off.

The biggest changes to fashion and lifestyle blogs over the past few years are definitely in the area of blog sponsorships. It's apparent that companies realized their ROI [return on investment] wasn't great when they gave away thousands in free merchandise to any blogger with a domain name. There's less “c/o” and there's less sponsorship from big brands. Boutique stores and Etsy shop owners still sponsor blogs regularly, but everything is on a smaller scale. A couple years ago bloggers quit their jobs without a second thought because they were making thousands per month from sponsorships. That is just not happening now. Unless you are an extremely well-known blogger (like Cupcakes & Cashmere), you are not going to replace the income you'd get from a full-time job. You're just not. Don't quit your day job to take pictures in front of the pretty trees in your backyard. That's just stupid.

Get Off My Internets is a bit like a tabloid publication staring bloggers we all know. How did you develop this approach?

Alice gets all the credit for developing GOMI. I think it's obvious why we take a certain approach with bloggers. That is, that bloggers can't have their cake and eat it too. They can't be public figures and expect everyone to love them. The good thing about GOMI is that it's there if they want to read it and if they don't want to, they don't have to. Several former GOMI targets haven't been featured in a long time because they took note of what was being said about them and made positive changes. A few have even thanked GOMI for pointing out their problematic posts or habits.

It seems like a lot of the fuel behind the fire comes from the comments and forums of GOMI. Why do you think people love to hate these bloggers so much?

I think that 50% of the readers on GOMI legitimately hate a few GOMI targets, but the other 50% just like having a forum to express constructive criticism. As GOMI has grown, the comments may seem to have gotten more harsh, but that's only because there are more people making them. If you read the content of what the commenters say, they're usually dead on in their analysis. GOMI commenters are by and large educated, savvy blog readers.

The best fashion and lifestyle blogs pick one or two things and do them really well. Atlantic-Pacific deserves all the hype she gets because she dresses well and takes photos of what she wears. The end. A good blogger is authentic and down-to-earth in genuine way. Any type of faux-genuine behavior, real or implied, gets labeled immediately. (The Daybook gets called on this a lot.) There's a fine line between being real and trying to be real.

I’m sure you’re no stranger to criticism yourself. How do you deal? Any advice for taking criticism, negative feedback, etc?

You have three choices when you are criticized. You can learn from it, dismiss it or try to respond to it. I recommend the first option. If bloggers want their blogs to be their business, they should conduct themselves accordingly and improve when possible. The good news is that if people are talking about you, you're still relevant to some extent. The bad news is you might only still be relevant because people love to hate you.

What advice would you give to bloggers looking to steer clear of your watchful eye?

The same themes come up on GOMI again and again and most of the time, bloggers are targeted because they do something stupid or out-of-touch or both. Pretending you are something you're not? Bad. Acting entitled or taking readers for granted? Bad. Lying and getting caught? Bad. Offending a large group of people with an offhand comment or post? Bad. The same things that would get you criticized in real life get you criticized on GOMI.

So what do you think? Do you think Get Off My Internets is right to call out bloggers when they seem out of touch, or is it just plain mean-spirited? Let us know in the comments.