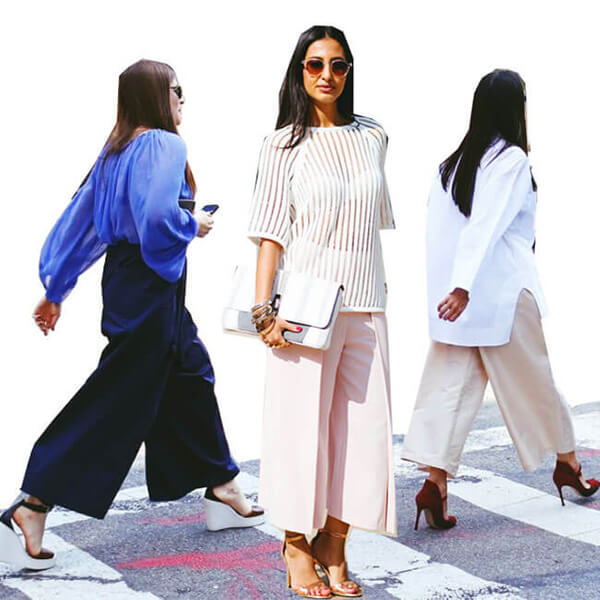 Last week, the New Yorker published a funny satire article called “Trend Piece.” The idea is that all trend pieces are so predictably similar that it's laughable. And although it's a humor piece, it's also instructional as to how to actually write a trend piece—and how not to screw one up.

Did you notice three or more street style stars wearing pants decorated with paillettes? Time for a trend piece!

It's perfect timing since fashion month is about to wrap up, and the internet is rife with street style galleries chock full of trends. Did you notice three or more street style stars wearing pants decorated with paillettes? Time for a trend piece! Did show-goers across Milan, Paris and NYC rock pork-pie hats? Trend piece!

If you need some guidance on how to write one, check out some lessons I gleaned from the New Yorker piece below.

“Some sexy stuff,” says pseudonym, not his/her real name because he/she is the writer’s friend on Facebook, a vague professional from a major city. “Less sexy but necessary follow-up to make the above sexy quote make sense.”

Lesson: It's great to start your article with a quote. Maybe try to find someone other than one of your friends as a source—although in a trend piece I doubt that would bother many people.

Transition from the lede: pseudonym is not alone; the writer has seen not one, not two, but exactly three examples of this would-be trend online. (The last one is a stretch.)

Lesson: Journalists call the first paragraph of an article a lede for unknown reasons (OK I looked it up: “The alternative spelling was invented to differentiate it from the metal lead (pronounced led), which was used in hot metal typesetting.” Also, DO back up your trend declaration with at least three examples.

Buzzword, buzzword, buzzword. Isn’t the buzzword on your mind now? Perhaps it is on other people’s minds? Read on or you’ll be clueless, dated, and without any friends in the world. Buzzword again!

Lesson: Repeat the name of the trend without giving away too much so the reader feels she MUST click past the jump.

First, statistic plucked from academic journal where the writer didn’t pay to pass the paywall. Also, a biased survey from a company with countless vested interests. It’s official: the above trend is slightly more common than you thought.

Lesson: Do use numbers to prove that your trend is actually a trend, but avoid biased sources.

Celebrity examples: one to three months ago, blurry photos revealed Katie Holmes doing/wearing/buying the trend. Within the last month, the writer spotted said trend again on Gisele, who looked so good that her picture will run larger than all this copy combined. Then today, solidifying the trifecta, the second-best Kardashian was photographed mid-trend!

Minutes later, the writer pitched this piece. Months after that, when trend is nearly over, this story appears. “Why is this news?!” angry anonymous commenter will write. “I could have written a way better article,” will add non-writer.

Lesson: Lucky you, you don't have to pitch your story to anyone. You can write about it immediately on your blog.

But how does this relate to the writer’s life? Insert anecdotal overshare here: when the writer tested said trend, the writer’s boyfriend didn’t like it. “Mildly clever diminishing comment,” he never said.

Lesson: Readers love personal anecdotes. But don't lie about what your boyfriend said. Paraphrasing and minor embellishment is usually OK if not put inside quotes.

“If you’re going to attempt the trend at home,” says trend spotter, “you must alter the trend to fit into the real world.” To rock the look your way, trend spotter has three easy tips.

1. Purchase a subtle, less trendy version of the trend, preferably in wearable, forgettable black.
2. Balance it with other, less trendy pieces, reminding people of how otherwise un-trendy you are.
3. Be very selective about where you sport your trend. Don’t even think of trying it at the office, out with friends, or when you’re not on the red carpet.

Lesson: You would never give such terrible advice. Tell your readers to rock the trend when and where they like with confidence.

And remember that while the trend is indeed a great trend for the trendy, regular people like yourself should probably avoid it. All involved in this trend piece will regret it. With any luck the trend will soon be over anyway. And if not, clever closing pun!

Lesson: Again, you'd wouldn’t give such condescending advice. And there’s nothing wrong with a clever closing pun.

So there you have it, everything you need to know to write a great trend piece, and hopefully get a little trend peace. See what I did there? 🙂