Jane Aldridge in a Sea of Controversy

IFB » Influencers, Bloggers, Must Haves, Inspiration » Jane Aldridge in a Sea of Controversy

As you may have read last week, there was a flurry of controversy over a recent profile of Jane Aldridge, the blogger behind Sea of Shoes, in a publication called Texas Monthly. In it, the reporter rather candidly describes days spent with Aldridge (he spent 4 weeks with her), as well as the some of the back-story of how she came to be one of the most well-known style bloggers in the space. (She also appeared in a televised interview with the author, Jason Sheeler.) New York Magazine‘s The Cut then cut-and-pasted their highlights from the profile into a post, with their trademark snark and sarcasm. That was followed by a rebuttal from Jane on her blog, arguing much of what was said came out of context. Then it was yet another follow up from The Cut, that includes a quote from Texas Monthly defending their reporter and the facts in their story. Jezebel got in on the action, too. As did ology.com. And Fashionista. All this in the span of about two days. 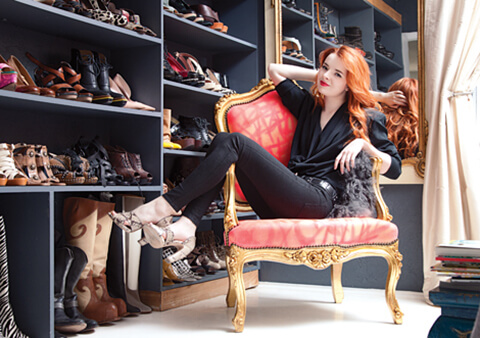 So, what was everyone so up-in-arms about? Jane has lived a rather privileged life, especially since her blog took off, and she's received vicious, negative feedback, nasty comments, and even a stalker or two as a result. Too many shoes! Too much designer stuff! She's a brat! She's spoiled! In many people's eyes, this profile only gave tangible evidence of what everyone thought of her already. When you start throwing around figures like $70,000 in the world of blogging, people are bound to judge.

As supporters of bloggers-as-businesses, we at IFB were rather torn about how to view all of this. Clearly, it takes money to produce the kind of content that keeps millions of people clicking on Sea of Shoes — including supplying her closet with designer and vintage pieces (her signature mix). It also takes money to run a business (her mom and dad function as her manager and lawyer), which her blog has become. Between public event appearances, designer collaborations and sponsored posts, she's making money – the kind of money that aspiring entrepreneurial fashion bloggers dream of! (as much as $20,000 per, anyone?)

From all this backlash, I find it hard to tell if people are criticizing her family's spending, her lifestyle or the elements of her personality that are illustrated in the Texas Monthly profile. Is she childish? Does she have a ‘mean girl' side? Is she too close to her mother? Is she just a 20-year-old, acting like a 20-year-old?

Where do you stand? IFB wants to open up a dialog about all this drama over a member of the fashion blogging community. Here's some of the chatter on Twitter so far:

@DressCourage: Read it, and couldn't help but feel it was slanted by a reporter who doesn't understand the first thing about fashion blogging.

@MsFemminista: Interesting take! I've never read her blog, to be honest, but I think a blog can be whatever you want it to be. If hers is a showcase for shiny, sparkly expensive things, then there's certainly a market out there for that!

@FashionableLena: I didn't think it was that bad. The NY Mag was. But neither will stop me from reading her blog.

@a_fashion_ado: I haven't ever heard good things about her, but I can't form an opinion until I've met her. hopefully she's not how they make it seem.

@chicstripes: read it & a few others- the actual piece came off harsh. Thoughts on asking for permission to read prior to an article going to print?

Leave a comment below, or join the conversation by tweeting at us (@_IFB). To ensure a mature conversation, please read all of the linked articles above. The more you read, the more backing your thoughts and opinions will have!