You Are Creative: Here’s How To Ignite Your Spark

IFB » Blogging » You Are Creative: Here’s How To Ignite Your Spark 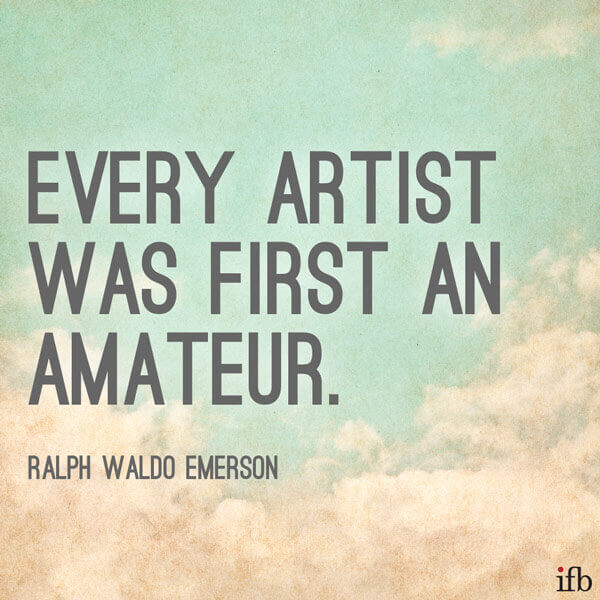 By Emily Vanderbeek of Isn't That Charming

Pablo Picasso is turning in his grave. Ernest Hemingway is shouting from the heavens. Andy Warhol is glaring at me with warning in his eyes. Why? I’m about to give away some of their secrets.

Here’s the thing about those who are creative: They weren’t born that way. While it’s easier to believe that Beethoven started composing music in the womb, the fact is that his father taught him how to play instruments at a young age and he practiced until it was second nature.

Creativity is in everyone. It’s everywhere. It’s in fashion, DIY projects, games like 제왕카지노 and cooking. It’s in neck-straining skyscrapers, books, paintings and photography. It’s in the art of conversation and silence. It’s in entrepreneurs, mathematicians, statisticians and lawyers.

Every single person has something to share, a fist full of imagination just waiting to be released, if they so chose. The difference between those that let it out and those that don’t boils down to recognizing an idea and taking steps toward making it happen. Creativity comes in many forms, but the smallest building block is a great idea that inspires you in one way, shape, or form.

So, how do you let it out? Channeling inspiration is different for everyone, but I believe that no matter what the subject, there are a few key things you can do to help open your mind to let ideas freely flow. While I am no expert and am learning every day, here are some pointers that I believe have worked for me.

Life has a lot to explore. Get out there and discover.

I’ve always been one to find interest in different things; consistency and repetition bore me. As such, I’ve often found myself diving into off-the-wall topics. The Mayan Calendar? Yes, in fact I did purchase “An Idiots Guide to 2012.” Astrology? An encyclopedia of birthdays sits next to my nightstand. Vegetarian eating? I go on and off. Graphic Design? I suck, but I’ve tried. Music? Taylor Swift one day, Led Zeppelin the next.

I say this for one simple point: Being curious expands your mind. The more you know, the more your brain has to work with. Find interest in the interesting. Absorb the world around you. Ask questions. And don’t accept answers.

You can’t have an open mind without practicing being open.

Make it a point to have new experiences and adventure in your life. Research events nearby and attend them. Volunteer. Take a stroll in a museum. Sit in a coffee shop. Do yoga. Run. Go on that trip you’ve been talking about for years. Absorb the world around you.

If experiences are the key, people are the key holders. They are, after all, life’s greatest teachers outside of your personal experiences. Be open to new friendships, conversations & viewpoints. Entertain a thought that you disagree with. Invite someone you hardly know for coffee. Accept invites to happy hours from coworkers. Call your grandma.

Say “yes” as much as possible, especially if it falls out of your comfort zone. This isn’t an easy thing for most people, even the most social of them all. But it gets easier with practice. Just keep in mind that it’s only when you allow yourself to step outside that you really begin to think outside the box.

The best ideas come from an uncluttered mind. This means having “me time” to sort through the clutter. While saying “yes” to experiences and people is key, so is allowing yourself to regroup with your thoughts.

Zen out. When you feel like you’re in a good place, start to brainstorm. Write down your ideas, even if you think they’re silly. Often, writing down one idea will spur a new one, which will trigger another, and soon you’ve got a handful of really great things to work with.

It’s when I’m listening to music with a blank screen in front of me that most ideas will pop into my head. Sometimes they suck. Sometimes they’re worth exploring more. Sometimes, they’re pretty good.

If you give your mind the time and ability to embrace your thoughts, I promise creativity will naturally flow.

Find some “idea” people that you are comfortable bouncing thoughts around with. Talk to them, brainstorm, get a second opinion. Ask for flaws in your thinking. Trust them to be honest and non-judgmental. (After all, if they truly are an idea person, they won’t know how to judge.)

Don’t have a specific idea to talk about? That’s okay — tell stories and ask questions. See where the conversation takes you. Randomness can be inspiring, and idea people will naturally lead the conversation to an interesting place.

An idea can be the most fabulous of them all and can die because of a lack of confidence. As I said before, implementation is a key factor of creativity. Many people get stuck when it comes to developing an idea for fear of failure or what others will think.

I too have suffered from insecurities. It was only once I stopped listening to what other people thought that I gained the bravery to take my ideas and run with them. I learned a valuable lesson along that journey: There is no reason not to be confident. If you fail, so what? Get back up and try again. Practice until you get it right. Be persistent.

People unfortunately can be mean, jealous, and catty. Let them. Rise above it. March to the beat of your own drum and soon they will follow. Lead the way.

The tv show Game of Thrones had a quote that has stuck in my mind. I think of it often, especially when I’m feeling a little insecure. The quote is: “The Lion doesn't concern himself with the opinions of sheep.”

Be confident. Be the lion.

What sparks your creativity? I’d love to learn from you.

Emily VanderBeek is a digital advertising professional living & playing in Chicago. She is the blogger behind Isn't That Charming, a lifestyle blog focused on the fashions, DIY projects & inspirations that charm her socks off.