IFB » Social Media » Instagram Trends 2018: What You Need To Know

Let’s start with the obvious. Instagram has now reached more than 800 million users (and counting). For many bloggers, vloggers and influencers it’s the most important social media platform for their respective digital brand. Whether you’re looking to promote your Youtube channel or develop yourself as an “Instagram blogger” influencers won't be shunning this social media platform any time soon. 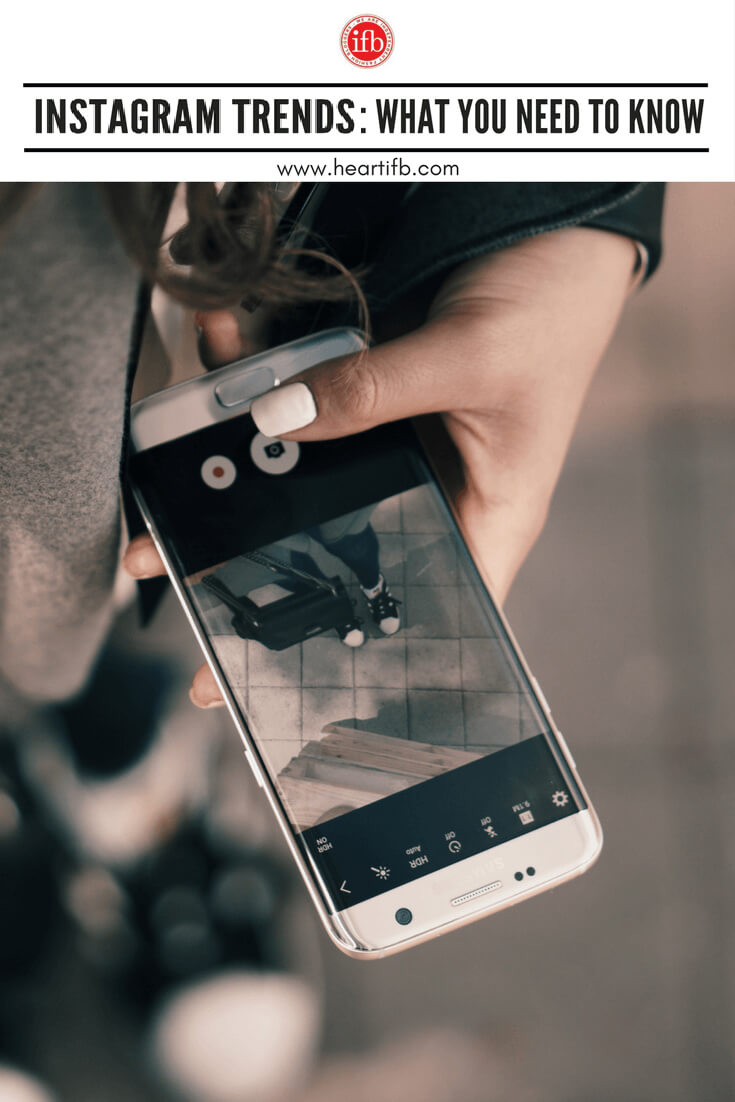 Throughout the past few years, Instagram has evolved immensely. The visual tastes of users, combined with the high quality of shareable content, have improved dramatically. In 2017, influencers were held to high standards to create top-notch content for their followers. Companies have embraced the power of influencer marketing, leading to an explosion of sponsored content by our favorite bloggers. Advertising boards around the world took note. The FTC stepped in, adding more guidelines in an attempt to bring transparency to the “Wild West” of digital marketing. And the elusive algorithm was instated, much to everyone’s dismay. There's no doubt about it, Instagram has changed a lot in the past year.

But we all know what was trending on Instagram in 2017. So, let’s get to the real question here: What Instagram trends can we expect to see in 2018? IFB has rounded up the Instagram Trends 2018, so you know what to expect this upcoming year. Check it out below and let us know if we've missed anything in the comments.

We hope you aren’t sick of vlogging. Because the popularity of producing video content is expected to rise in 2018. And especially so with Instagram. So, what can you expect to see? Refined Instagram stories and better video content, that's for sure. In fact, the prevalence of Instagram stories will only continue to increase.

The Instagram stories feature may only be a year old, but it’s becoming popular in a variety of niche markets. It’s not difficult to forsee that by the end of 2018, this feature will be used by almost half of Instagram users. This implies that companies will want to collaborate with influencers that are comfortable sharing content on their Insta-stories. Therefore, if you aren't already using Instagram stories, get on it now!

Get Comfortable In Front of The Camera…

Therefore, if you haven’t already started a Youtube channel for your brand (or purchased a vlogging camera), you may want to consider doing that sooner than later. Ditto for getting comfortable on Instagram Live.

Sandwiching (And Other Attempts At Beating The Algorithm)

In April 2016 – much to the annoyance of bloggers, influencers and brands alike – Instagram decided to throw its users a curve ball. Fashion’s favourite app shifted from showcasing content in a strictly chronological order to one determined by an algorithm.

According to Instagram, the algorithm was designed so that users would see more photos by users that they liked. Despite this statement, there was significant negative feedback by its most popular users (i.e. influencers and celebrities). Ever since the algorithm was instated influencer industry elites, corporate companies and bloggers of all levels have been working to beat it. And while we don’t know much about it, there seems to be a general understanding that post placement within a user’s feed involves a mix of seven key components.

While attempting to outsmart the new algorithm is no walk in the park, a few companies are employing tactics to get around this tricky infrastructure, designed to (supposedly) obscure promoted posts. Enter a new technique, known as “Sandwiching”. Some big name brands are utilizing this method in an attempt to outsmart the elusive Instagram algorithm.

So… What is “Sandwiching?

According to an article on digiday.com, Sandwiching is strategically placing promoted posts between imagery forecasted to have high rates of engagement, based on existing data. For example, say you’re an influencer looking to increase the engagement of a particular post. You could try “sandwiching” this post on your Instagram, in between two posts you know your followers will enjoy and interact with (like a contest-related post, giveaway, etc.). Theoretically the post in the middle will be “boosted”, by having a post on each side of it with high engagement.

“Adam Kronengold — VP of Digital Innovation at Authentic Brands Group, which owns 29 brands . . . said his team started to test the strategy after noticing that certain Instagram posts were receiving particularly low engagement. ‘We thought, “Why the hell is this only reaching 3 percent of our audience?” Over time, we’ve been able to structure our strategy to get promotional stuff in front of the most eyeballs possible.’”

While it’s impossible to fully “crack” the Instagram algorithm, we forecast that there will be plenty of other attempts to beat the system in 2018.

Elle Australia published an article, forecasting Instagram trends 2018. The article mentioned nothing about hashtags, algorithms or engagement tactics. Instead, it focused on imagery trends and what we can expect to physically see in our feeds next year.

“Minimalist Scandi-inspired style dominated our wardrobes and our ‘grams in 2015, with Facetune's ‘whiten' feature on very high rotation. Flat lays taken on marble (and exclusively marble) was the trend du jour in 2016. And 2017's dominant style is yet to be determined,” author Nikki Chowdury writes.

Lots of influencers posing in greenhouse, by newsstands or at McDonalds. They'll be sporting Michelle Pfeiffer-esque (circa Scarface) bob haircuts. This is after they have bathed in a tub full of flowers and sliced grapefruits. Because, you know, Lush bath bombs are way too basic now. And they’ll probably be wearing something sparkly. Or, they might be trying to camouflage into the background of a decadent, five-star hotel in Moscow.

We’re fully aware all of the above sounds a little but ridiculous, but head on over to elle.com.au to check out more of their predicted 2018 Instagram image trends.

In the past few months, the Federal Trade Commission has been clamping down on influencer advertising in the United States. In September 2017 it reached out to a number of social media stars and celebrities, and took the opportunity to issue additional guidelines regarding disclosures. If you’re an influencer that is based out of the United States, we highly recommend your check out The Fashion Law’s Q&A on common influencer-specific questions.

We’re now hearing news out of the United Kingdom, that the British advertising authorities are getting onboard with cracking down on influencer advertising. The Advertising Standards Authority (the British version of the FTC) now has its eyes on sponsored social media posts, and are willing to take action against influencers that are not abiding by the board’s regulations.

According to The Fashion Law, reality star and influencer Marnie Simpson recently uploaded images of products from two different companies onto her Snapchat. And she failed to identify these sponsored/paid Snaps as an advertisement. The ASA were clearly not please. They stated that while it was evident that the promoted content differed from her typical Snapstory behaviour, she still had not labeled the Snaps as an advertisement and was breaching regulations.

While the ASA has no legal power to impose fines to individuals that breach the regulations, they are able to recommend them to the National Trading Standards Institute. This board does have the power to take actions further and impose fines. Therefore, it's only a matter of time before we start seeing influencers penalized for failing to disclose sponsored content.

And Simpson isn't the only influencer under the ASA's watch. Other British influencers, like Millie Mackintosh, have been under scrutiny  in the past few years.

It won't be long before other countries to follow suit. With the popularity of companies reaching out to influencers for sponsored/paid posts and social media shout outs, we expect that advertising boards around the globe will be working to ensure transparency.

But there’s no doubt about it. Influencers on a variety of platforms are going to have to be a lot more transparent with their audience in 2018, when it comes to hawking teeth whitening toothpastes, vitamin gummies and detox teas.

Shopping on Instagram has now been available for some time now. It was first made possible in late-2016, when the platform introduced shoppable photos. This feature, however, was limited to only certain brands.

But in 2018, we can only expect to see Instagram shopping take off. According to theverge.com, Shopify has been testing the feature throughout 2017, and the company notes that product tags are only visible to users in the US. Merchants can only sell physical products like food, books, clothing, toys, art, stationery, and electronics. Only five products can be tagged in both new and old posts. Instagram says once the testing phase has been completed, shopping on the app will be available to all.

Did you find this post helpful? Are there any Instagram Trends 2018 that you think we missed? Let us know in the comments below.