If you’re thinking about getting into vlogging, there are some great cameras out there that can make the process a lot more fun and easier than ever before. 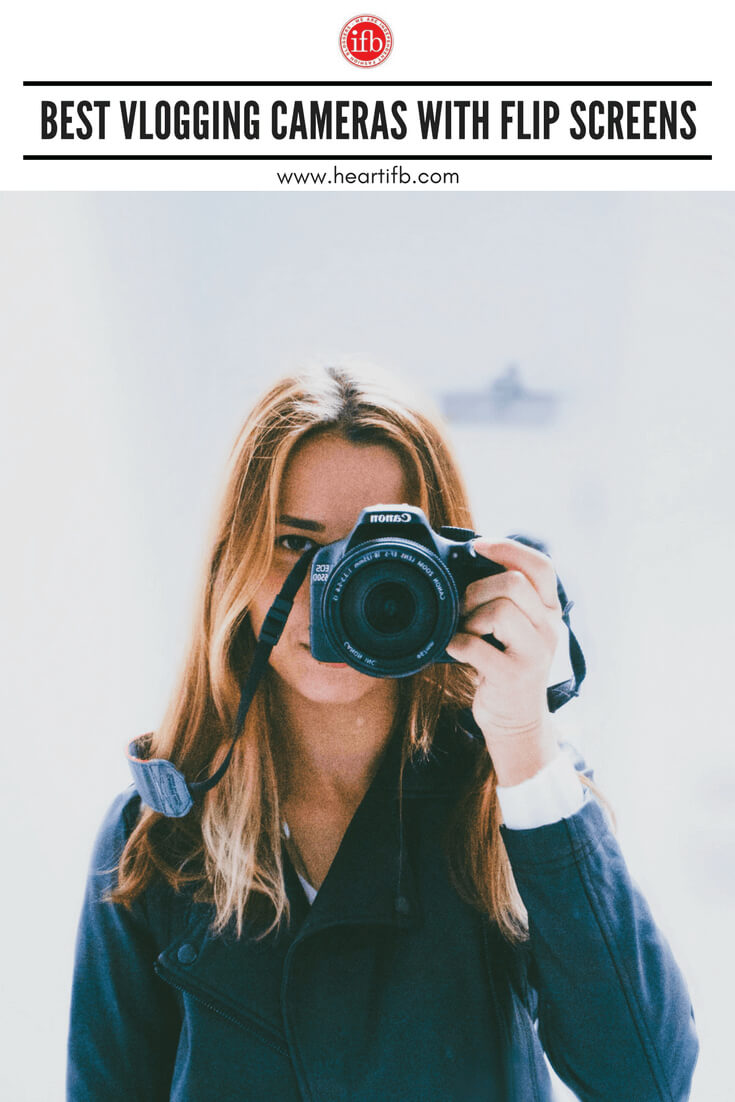 The newer vlogging cameras with flip screens demonstrate just one of the cool innovations that are helping users create better videos.

Now for the obvious disclaimer: the real trick to having a successful vlog lies in your content, not the hardware you’re shooting with. That said, having a camera that connects to your phone with Wi-Fi can be a huge time saver when you’re trying to create and share content quickly. Also, having a camera with a flip screen can help you get just the right look–without having to take a dozen tries because you keep letting yourself get out of the frame. 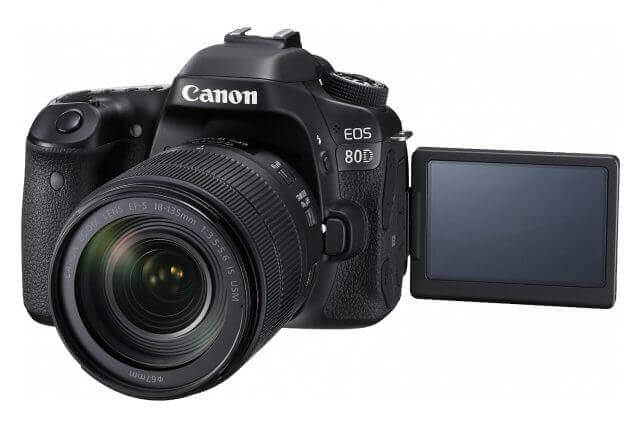 Canon EOS 80D is the most professional camera choice for video bloggers right now. It might not be small and compact, but this camera packs a punch. No wonder it’s so popular with YouTube creators.

One of the standout features of the Canon EOS 80D is its hybrid dual pixel autofocus feature (which many DSLR cameras lack). This means the camera will automatically focus on its subject. All the creator has to do is tap a subject the LED touch screen, and the Canon EOS 80D will do all the work to ensure the object or person is in focus.

In addition to the autofocus feature this camera also has a three inch, vari-angle touch monitor panel screen. This means the touch screen can also flip out and turn around, making it easier for creators to view themselves while vlogging. Other features include dual pixel CMOS AF, for fast focus in live view and video, and a time-lapse capabilities (in case you’re interested in shooting moving clouds).

While this is definitely a larger and heavier camera, and might not be as convenient for on-the-go vlogging, we highly recommend it for filming beauty tutorials or “story time” videos. If you want to take your vlogging game to the next level, this camera is for you. 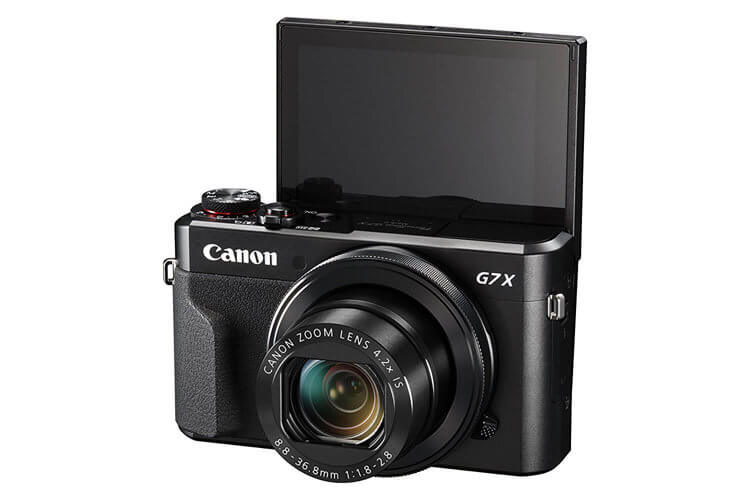 This is a great camera that will help you take fantastic videos and still photos. It performs well in low-light situations. It has built in Wi-Fi and NFC to make sharing with your phone quick and painless. And most importantly, has a killer flip screen to help you see what you’re shooting, while you shoot it. And it also takes great selfies.

The videos can be captured in 1080p at 60 frames a second, and saves them in .mp4 format, a very popular and versatile format that makes sharing on any platform super easy.

The 3.0” touch panel can also tilt downwards to 45° to make shooting above your head much easier as well (you know, like when you’re at a concert and you’re capturing the show instead of just watching it).

We also love that it’s a Canon. Little needs to be said about a company that has continually made professional-grade equipment for decades and continues to be a leader in consumer and prosumer-level equipment as well. Buying a Canon is always a safe bet, and while it’s not as budget-friendly as some of our other choices, we think it’s the best camera out there for people who take vlogging seriously.

Also, the G7 X Mark II is used by Casey Neistat, one of the most prolific and famous vloggers out there. Considering the guy can shoot with literally anything he wants, it’s a pretty good indication that this camera is legit. If you're looking to get into vlogging in 2018, this camera is a good place to start. 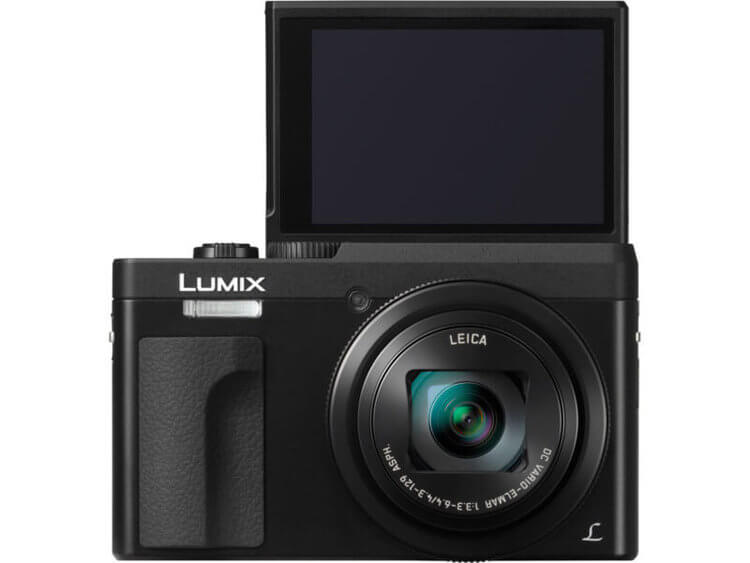 While this didn’t make it into our top two choices, the Panasonic LUMIX DC-ZS70 is a pretty decent vlogging camera. It’s definitely the camera for those vloggers that are also looking for a camera that can take great selfies, as this one has plenty of features that are… selfie-friendly.

For starters, the screen is accompanied by a variety of self-snapping functions, such as a 4K Selfie mode and the option to blur the background or keep it sharp with the Background Control option. You can also have the camera automatically take the image when you wave your hands across your face, while the Buddy Shutter option fires the shutter when two people bring their faces close together.

On top of all of that, it also has a very good zoom range and very effective image stabilization. It’s 4K is also very competitive, considering it’s at a much lower price point compared to the Canon EOS 80D. 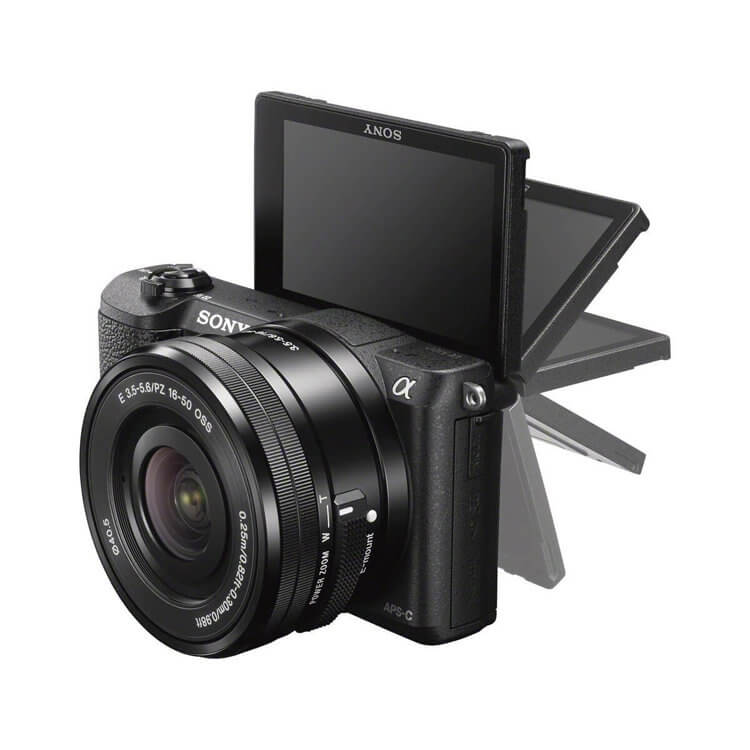 The Sony a5100 is a compact mirrorless compact that shares many of the features of its big brother, the a6000. It sports a 24.3MP APS-C CMOS sensor with on-chip phase detection covering 92% of the frame, as well as Sony's latest image processor. Its 3″ touchscreen LCD can flip upward 180 degrees for easy vlogging on the go.

Video features are impressive, with support for the XAVC S codec, allowing for 1080/60p and 24p movies with a 50Mbps bit rate. 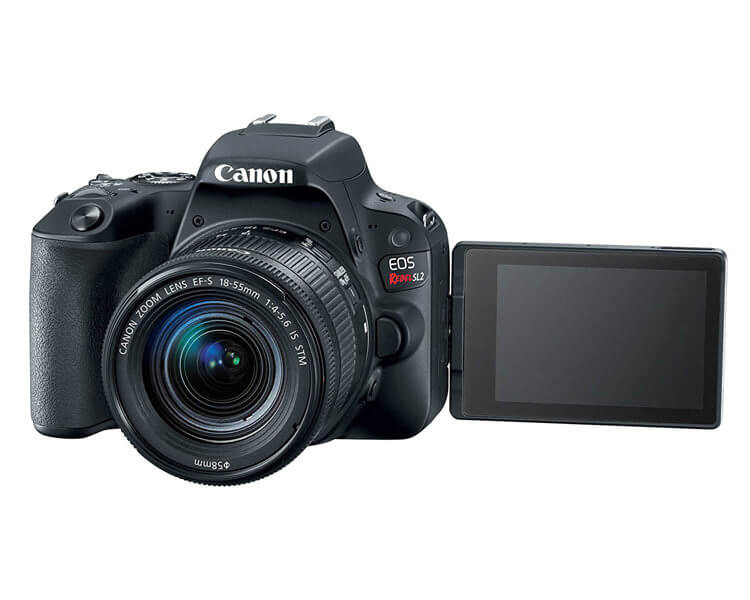 Canon EOS Rebel SL2 is a compact DSLR camera. It’s a step above Canon’s entry-level DSLR’s, but offers more bang for your buck.

The body of the camera is smaller (and comes in three different colours), has a 24-megapixel APSC sensor with Canon’s Dual Pixel CMOS AF for confident refocusing in live view and movies. It also boasts a fully articulated touch screen, and WiFi with both NFC and Bluetooth for easy connectivity. Overall, it’s great for newbie photographers or vloggers, looking to buy their first camera with a large sensor and interchangeable lenses.

Like the Canon EOS 80D it has autofocus capabilities, a flip-screen and microphone input allow you to produce results rivaling more expensive cameras.

Also, be sure not to ignore the presence of Bluetooth. It takes care of previously tricky WiFi connections, allowing you to easily remote control the camera with your phone, wirelessly transfer photos for sharing, or tag images with the GPS location. Pack all of this into a small, but comfortable body, and you’ve got a truly compelling option for first-time DSLR buyers.

What we’re hesitant to recommend…

There are other cameras from Nikon and Sony with flip screens, but they’re no longer easy to find or currently being produced. And when you do find them, they’re often refurbished or an international version that carries no warranty. However, it can save you lots of money. We find that it’s a worrisome to get into a camera with no warranty, so we’re a touch hesitant to recommend these.

What we don’t recommend…

Over the past 2–3 years, many people have fallen in love with the Samsung NX Mini and other vlogging cameras with flip screens from Samsung. But as of 2016, it seems that Samsung has discontinued its line of digital cameras. As such, we don’t recommend buying one as it always feels a bit scary buying a product that the parent company doesn’t even sell any more. If they’ve given up the business, it’s better to look to companies that are still committed to digital cameras.

Our favorite camera for vloggers is the Canon EOS 80D. It’s a powerful camera, that makes vlogging easy for both beginners and advanced creators. It might be a heavier camera, but if you're looking for a high quality vlog this one is your best bet.

Do you have a favourite vlogging cameras with flip screens? Let us know in the comments below!