The Most Important Moments In Fashion Blogging History 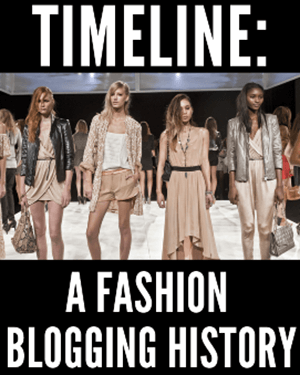 Do you know your fashion blogger history? Our community has been rapidly changing over the past couple years — so fast, in fact, that we've barely had time to take a look back at our progression. In honor of our 7th IFB Con (can you believe it!? 7!!), here's brief peek at how bloggers have evolved thus far, a la timeline format. Let's start from the beginning:

December 1978: As the result of a chance photograph of Greta Garbo, Bill Cunningham published a group of his impromptu pictures in the New York Times, which soon became a regular series now known as his street style column.

1992: Tim Berners-Lee launches the first Web site, which had a “What's New” page informing readers about new information related to the Web site.

Spring 1999: Online journal author Peter Merholz takes Jorn Barger's word “weblog” and splits it into the phrase “We blog.” Blog soon becomes shorthand for weblog — and 13 years later it's still the term we use today!

1999: The development of RSS, or Really Simple Syndication makes it easier for people to subscribe to blog posts, as well as distribute them to other sites across the Internet.

2002: Fashion blogs begin to emerge on the internet.

2003: Glam Media, a company with more than 1,500 lifestyle websites and blogs, including Glam.com, is founded. The basis includes an ad network, where blogs come together under umbrella advertisements.

2003: Using the alias Bboy777, Bryan Grey Yambao joined the blogosphere and eventually built a following for himself after posting stories about his weight-loss goals, fashion purchases and hatred for fake designer goods — in 2004 he became “Bryanboy.”

2004: Videographer Steve Garfield launches his video blog and declares 2004 “The Year of the Video Blog,” more than a year before the birth of YouTube.

September 2005: The Sartorialist, aka Scott Schuman, begins blogging about fashion on the streets. According to an article on Business of Fashion: According to Mr. Schuman, The Sartorialist was originally inspired by Brooklyn-based writer Grace Bonney’s interior design blog Design*Sponge. “I could tell she was doing it by herself and I liked the idea that she was having an interaction,” he said. “She had like 30 comments on a post and I thought that was really cool.” Schuman decided to start a similar blog for fashion after examining a series of photos he had taken of a few stylish guys in New York’s Fulton fish market while on a photography course.

2006: The launch of Twitter, one of the first “micro-blogging” communities that allows user to publish and receive short posts via the Web, text messaging and instant messaging.

2006: A research report from the Pew Internet and American Life Project estimates that 12 million U.S. adults publish their own blogs.

2007: Sugar, the San Francisco site for women’s content, announced it has acquired Coutorture.

2007: Technorati reports it is tracking more than 112 million blogs worldwide.

April 2009: Neely is featured in CNN Money for her blogging business, which states she was getting “35,000 hits a day.”

September 2009:  IFB hosts an event with two panels about fashion blogging which evolved into the IFB Conference (and we are now presenting our 7th conference this September)!

2009: Dolce & Gabbana made news by filling its front row—typically the sole provenance of A-list actresses and Anna Wintour—with fashion bloggers, even equipping them with laptops.
2009: The Federal Trade Commission (FTC) publishes its regulations regarding bloggers.

September 2010: Kim France, the founding editor of Lucky Magazine, leaves the print biz to start her own blog, at age 48.

2010: Leandra Medine, creator of The Man Repeller, was studying journalism in college when she started her blog.

2010: The FTC publicly investigates the company Ann Taylor after mandating an update that stipulates that bloggers must disclose “any material connections they share with the seller of the product or service” when writing about it. Bloggers and brands can be fined up to $11,000 for failing to reveal sponsorships. According to Mashable, “Ann Taylor invited bloggers to preview its Summer 2010 LOFT collection, promising attendees a ‘special gift' and entry into a ‘mystery gift-card drawing' for those who submitted posts to the company within 24 hours of the event. Ann Taylor avowed to reveal the value of the gift cards, which ranged from $50 to $500, to bloggers after receiving their posts.” No fines were levied.

June 2012: Scott Schuman states he was disgruntled by the D&G fashion show back in 2009 in an article by GQ: “[Dolce & Gabbana] got a humongous amount of press. … ‘Look, we brought the bloggers in and gave them the front row. Look at the dancing-monkey bloggers!’ ” He then added, “I could barely bring myself to sit down.”

2012: Nick Axelrod leaves Elle for Emily Weiss's beauty blog Into The Gloss, where he is in the early stages of hiring contributing writers.

2012: Leandra Medine is also expanding her content by trying out new writers so that she may transition from a “blog” to a website — which she describes as a cross between Vogue and Jezebel.

So, what's next in the timeline? It seems that a few of the more prominent personal bloggers are expanding to develop bigger websites. Does this mean that bloggers are headed to be the next big time fashion editors, presenting their insight on the web rather than in pages of a glossy? What do you think?